On arrival at Jhansi railway station/Gwalior airport, meet our representative who will be there for your welcome and thereafter transfer you to your final destination  Orchha. Check in at your already booked hotel in Orchha and get ready to leave for the local sightseeing tour. Our day tour to Orchha will include a visit to, Orchha fort complex, Laxminarayan Temple and Raja Ram Temple. All these are the major attraction of the place and can leave you with a mesmerizing experience. After exploring these places we will return back to the hotel for a relaxing overnight stay.

Orchha fort complex is a must visit attraction of town with a number of palaces within it portraying the stories of wonderful past. It is the only place in country where Lord Rama is worshipped as a king and not as a god. Start your day with a healthy breakfast in the hotel. Rest of the day is free for leisure. During your free time, you can either rest in hotel and take pleasure of its modern amenities or explore other interesting places of Orchha such as Orchha Sanctuary, Sunder Mahal, Chaturbhuj Temple, Raj Mahal and Chattris. Later return back to the hotel for a comfortable overnight stay.

Raj Mahal is one of the famous palaces of Orchha that grab attention of visitors from around the world. It was initially built by Rudra Pratap Singh in the 16th century and completed by his successors.

Chattris are basically the tombs of Maharajas which have been positioned on prominent platforms and supported by pillars. They are designed and structured in a unique way allowing them to enter in the list of major tourist attractions of Orchha. 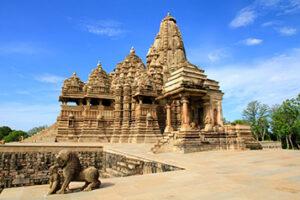 After breakfast in the morning, we will leave from Orchha and drive to Khajuraho. On arrival, check in at your already booked hotel and get ready to leave for the local sightseeing tour of Khajuraho. In our day tour, we will be visiting the legendary temples including Chitragupta Temple, Devi Jagdamba Temple and Adinath Temple that are supposed to be constructed in the 9th and 10th century A.D by Chandela rulers. These temples are famous for their unique and ancient engravings. After witnessing some of the major wonders of Chandela rulers, we will head back to our hotel for an overnight stay. In the morning after breakfast, we will spend our rest of the day in Khajuraho , Vaman Temple and Parsvanth Temple. Later return back to the hotel for a stress bursting overnight stay.

After noon optional tour on Direct payment basis Panna National Park near the Ken River with its deep gorges, tranquil valley and dense teak forests. you could sight tigers and panthers along with herds of chinkara, sambar and several other wildlife species. The rest of the evening is at leisure to explore the local shops and market, Night stay at Hotel.

On the last day after breakfast, we will check-out from the hotel and head towards the khajuraho airport/ khajuraho railway station to catch the flight or board train for onward destination.