Azerbaijan, the nation and former Soviet republic, is bounded by the Caspian Sea and Caucasus Mountains, which span Asia and Europe. Its capital, Baku, is famed for its medieval walled Inner City. Within the Inner City lies the Palace of the Shirvanshahs, a royal retreat dating to the 15th century, and the centuries-old stone Maiden Tower, which dominates the city skyline 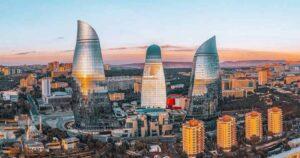 • Arrival Day
• Meeting our representative at the Airport and transfer to Hotel
• After Freshen-up
• Panoramic City Tour at Baku as per the below schedule.
• Highland Park (Dagustu Park)
• Upland Park is located on a hill in the western part of the city. This is the best place to see the city and the Baku Bay which commands a breathtaking panorama of Baku.
• Flame towers :- Completed in 2012, this trio of sinuous blue-glass skyscrapers forms contemporary Baku’s modern architectural signature. The design was conceived as a set of flames, driven from the ground up one of the main hills of Baku. Fire symbolizes energy and eternity, and alsogoes back to the ancient worship of this element.Baku National Boulevard:- the 2nd longest boulevard in the world, which is the favorite resting place of the Baku residents and capital guests, stretching for a long way along the seashore.
• Dinner time
• Drop off to Hotel
• Overnight stay at hotel 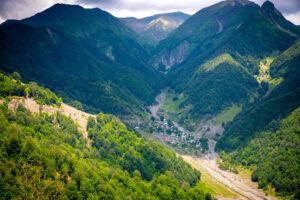 • GABALA (Tufandag Resort & Nohur Lake )
• Morning after the Breakfast Hotel Checkout
• Pick up from hotel by 9:AM
• Gabala is considered a popular tourist destination due to the combination of a very good spring climate, mountainous landscape, and diverse fauna. Many sizable world hotel chains have a presence in the city. Natural climatic conditions of the region create opportunities for the development of both summer and winter tourism in the region.
• The northern side of Gabala belongs to the southern slopes of the Greater Caucasus mountain range, the central part to Alazan-Haftaran valley, the southern part to Ajinohur upland. Furthermore, the highest mountain peak of the republicMount Bazarduzu (4466 meters) is situated in this region. Gabala is around 225Kms away from Baku 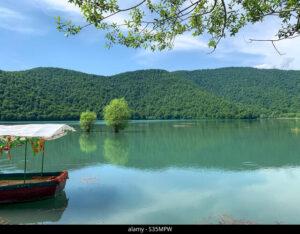 • Nohur Lake: Guests will visit Nokhur Lake:-Beautiful quiet nature, clean water surface surrounded by high mountains – all this brings peace and a sense of distant exotic countries. Swimming in the Hohurlake is prohibited, however, fishing is allowed here – this is one of the main entertainment attractions that people enjoy near this place. Nohur lake which existed as a natural lake until 1949, used to be surrounded by a swamp covered with dense reeds and water plants and there was a lake with yellowish-green water in a deep groove in the central part of it. In 1949, by building a soil dam with 850 m length, 8-10 m height and 4-6 m width, a water-storage reservoir was constructed in the south part of this lake
• Lunch time
• Proceed to Tufandag Summer Winter Complex:
• Longest teleferic of the world – Whether for skiing, or just for memorable summer views of the Caucasus scenery behind Gabala, jump aboard the Tufandag network of four cable cars. The complex serves up to 3,000 people a day.
• Back to Baku Hotel
• Dinner at Hotel

• Breakfast at hotel
• Transfer to Sheki
• Trip to Bio Garden
• Visit to Palace of Sheki Khans and Visit to Karavansaray
• Walking in Sheki city center, shopping.
• Transfer to Gabala
• Night at hotel 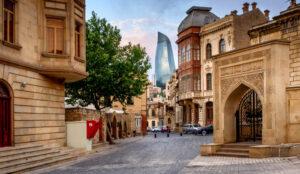 • City tour
• Morning after the Breakfast Pick up from Hotel by 10:00
• Icheri Sheher or Old city (Inner City) walking tour :- the pearl at the heart of Azerbaijan’s cultural heritage, has a history of thousands of years and is located in the historic centre of ancient Baku, the capital city of the ancient state of the Shirvanshahs and symbol of Azerbaijani statehood .The historical and architectural reserve includes the Shirvanshah Palace, Maiden Tower, Medieval Market Square, Icheri Sheher Archaeological Museum, caravanserais, mosques, madrassahs, bath-houses, Baku Khans’ House also numerous rich residences of the ХIХ century.
• Fountains Square/ NizamiStreet(walking tour ) Endlessly popular with strollers, this leafy piazza forms Central Baku’s natural focus. The fountains for which it is named include one topped by shiny silvered spheres giving fish-eye reflections of the trees and stone facades. And the beautiful statue-inlay ed facade of the Nizami Literature Museum ( you can do shopping here as well )
• Free time
• Drop off to Hotel
• [Breakfast + Dinner] Overnight stay at hotel 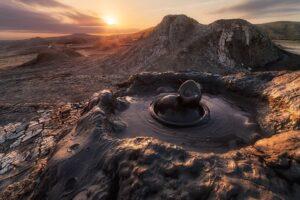 GOBUSTAN & ABSHERON Tour
• Morning after the Breakfast. Proceed to visit Gobustan and Absheron
• Pick up from Hotel 9:00 Gobustan State Reserve a UNESCO World Heritage site located west of the settlement of Gobustan, about 40 miles southwest of the center of Baku was established in 1966 when the region was declared as a national historical landmark of Azerbaijan in an attempt to preserve the ancient carvings, mud volcanoes and gas-stones in the region. Gobustan State Reserve is very rich in archeological monuments, the reserve has more than 6,000 rock carvings, which depict primitive people, animals, battle-pieces, ritual dances, bullfights, boats with armed oarsmen, warriors with lances in their hands, camel caravans, pictures of sun and stars, on the
average dating back to 5,000-20,000 yearsMud Volcanoes – a whole family of ‘geologically flatulent’ little conical mounds that gurgle, ooze, spit and sometimes erupt with thick, cold, grey mud. It’s more entertaining than it sounds – even when activity is at a low ebb, you get the eerie feeling that the volcanoes are alive. Azerbaijan is in the first place in the world for the amount of mud volcanoes. Mud volcanoes broadly spread in Azerbaijan. Half of the total mud volcanoes in the world is in Azerbaijani Republic.
• Lunch at local Restaurant 13:00 ( Azerbaijani Cuisine )

• Heydar Aliyev Center– Is a 57,500 m2 (619,000 sq ft) building complex in Baku, Azerbaijan designed by Iraqi-British architect Zaha Hadid and noted for its distinctive architecture and flowing, curved style that eschews sharp angles.[2] The center is named after Heydar Aliyev, the first secretary of Soviet Azerbaijan from 1969 to 1982, and president of Azerbaijan Republic from October 1993 to October 2003. (Photo Stop only )
• Ateshgah (Suraxani Fire Temple) – “Fire Temple of Baku” is a castle-like religious temple based on Persian and Indian inscriptions, the Zoroastrian place of worship. Although the site was originally a place of worship for Zoroastrians, the fortified complex you see today was built by 18th-century Indian Shiva devotees.
• Yanar Dag: Burning Mountain is considered as “eternal fire” and fulfills the trip with unique and interesting experience. In the 13th century Marco Polo mentioned numerous natural-gas flames spurting spontaneously from the AbsheronPeninsula. The only one burning today is Yanar Dag.
• Dinner at Restaurant 20:00 ( Indian Dinner )
• After Dinner back to Hotel
• [Breakfast + Lunch + Dinner] Overnight stay at Boulevard Hotel By Marriot 5*

• DEPARTURE Day
• Morning after the breakfast check out
• Pick up from Hotel 9:30
• Transfer to Baku International Airport
• [Breakfast]