Delhi, India’s capital territory, is a massive metropolitan area in the country’s north. In Old Delhi, a neighborhood dating to the 1600s, stands the imposing Mughal-era Red Fort, a symbol of India, and the sprawling Jama Masjid mosque, whose courtyard accommodates 25,000 people. Nearby is Chandni Chowk, a vibrant bazaar filled with food carts, sweets shops and spice stalls.

Today arrive Delhi and transfer to your Hotel. India’s capital and a major gateway to the country, contemporary Delhi is a bustling metropolis, which successfully combines in its folds – the ancient with the modern. Amidst the fast spiralling skyscrapers the remnants of a bygone time in the form of its many monuments stand as silent reminders to the region’s ancient legacy. The first impressions for any visitor traveling in from the airport are of a spacious, garden city, tree-lined with a number of beautiful parks.

After breakfast proceed for tour of Old and New Delhi. Old Delhi, the Mughal Capital of Shahjahanabad. Visit the Jama Masjid which is the principal mosque of Old Delhi in India. Commissioned by the Mughal Emperor Shah Jahan, builder of the Taj Mahal, and completed in the year 1656 AD, it is the largest and best-known mosque in India. It lies at the origin of a very busy central street of Old Delhi, the Chawri Bazar Road. The mosque of Friday was built from 1644 to 1658 during the reign of Shahjahan. The mosque is 80 m long and 27 m wide. The courtyard can accommodate 25,000 worshippers and occupies 408 square feet. 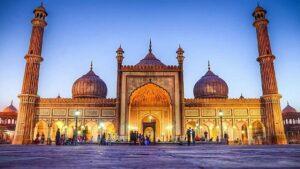 Later we proceed to visit Raj Ghat where Mahatma Gandhi – The Father of Nation, was cremated and drive past the Red Fort [ from outside] – the palace for Shahjahan’s new capital, Shahjahanabad, the seventh Muslim city in the Delhi site. Wander in the busy streets of the mile long Chandni Chowk, popularly called “The Silver Street”. Enjoy the ‘Cycle Rickshaw’ ride in Old Delhi.

In the afternoon proceed for tour of New Delhi, which reflects the legacy the British left behind. The division between New and Old Delhi is the division between the capitals of the British and the Mughals respectively. The division in the walled city and New Delhi also marks the division in the life-styles. The walled city is all tradition where one will be able to glean a past life-style in all its facets, colours and spells. New Delhi in contrast, is a city trying to live up to the best of 21st century standards.

The tour to Imperial Delhi will start by visit to the Qutab Minar, the tallest stone tower in India. The Qutab Minar was started in 1199 AD by Qutab-ud-Din Aibak and completed by the sultan’s successor and son-in-law, Iltutmish. The building is 72.5 m high and has 379 steps from the bottom to the top. The Minar is tapering with the diameter of the base is 14.3 m while at the top floor it is 2.7 m. The Qutab Minar is still the highest stone tower as well as one of the finest Islamic structures ever raised in India.
Later visit Humayun’s Tomb, built by the widow of the second Mughal Emperor, Humayun, it is an outstanding monument in the Indo-Persian style, a precursor of the Taj Mahal.
Drive past the imposing India Gate, the Parliament building and the Rashtrapati Bhawan, the President’s residence.
Afternoon is free to walk around in the colorful and bustling bazaars for personal exploration or shopping.

After breakfast drive to Agra; Arrive Agra and transfer to your hotel. Agra came into limelight during the rule of Afghan King Sikandar Lodhi – who had made it the capital of his empire. Later in 1526 A.D., the Mughal Emperor Babar took upon himself the task for rendering Agra, a unique character and beauty of its own. Agra – in terms of ambiance is still associated with its Mughal period. The Mughals besides being great rulers were also great builders and they preserved their best architectural wonders for Agra & its neighbourhood. It has many wonderful monuments and the Taj Mahal, the greatest of them all, is a masterpiece of Mughal architecture at its best. 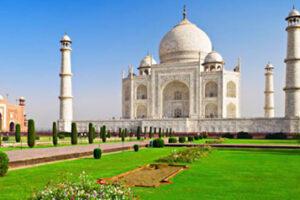 Later visit the Taj Mahal (closed on Friday) – The Taj Mahal (closed on Friday) – The Taj Mahal is everything that has been said about it and more. Built by the Mughal Emperor Shah Jahan as an expression of his love for his wife Mumtaz Mahal, in mid-17th century, the Taj Mahal is truly one of the wonders of the world. Though the Taj appears to be amazingly perfect from almost any angle, it is the close-up marble inlay work, which is really astounding.
Later visit The Agra Fort, an outstanding example of Mughal architecture. Agra Fort – the seat and the stronghold of the Mughal Empire under successive generations. This was the seat of Mughal rule. Shahjahan added the impressive quarters and the mosque while Aurangzeb added the outer ramparts. Visit its Hall of Public Audience and its Royal Pavilions. Besides the historical monuments, one can also explore Agra’s rich heritage of handicrafts in its markets.
Also visit Itmad ud Daula -This tomb was built in 1622 for Ghiyas Beg, father of Empress Noor-Jahan, the wife of Emperor Jahangir. It is beautifully conceived in white marble, mosaic and lattice and set a precedent as the first Mughal building to be faced with white marble inlaid with contrasting stones. Sometimes also called ‘Baby Taj’, it is small, intimate and has a gentle serenity.

After breakfast proceed drive to Jaipur visiting Fatehpur Sikri enroute. The deserted red sandstone city was built by the Great Mughal Emperor, Akbar, as his capital and palace in the late 16th century. It was abandoned soon after it was built when the local wells went dry and it remains today in much the same condition that it was over 300 years ago. It is complete with palaces and mosques and used to be a town larger than London when it was originally constructed. Now it is an extraordinary place to wander around with its buildings in near perfect condition.

Later drive to Jaipur; arrive Jaipur and transfer to hotel. 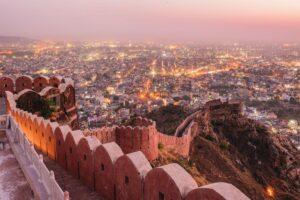 The capital of Rajasthan Jaipur – popularly known as the “Pink City” as the Pink sandstone was used to construct the buildings in the old walled city. Jaipur owes it’s name, it”s foundation and it’s planning to the Great-Warrior-Astronomer Maharaja Jai Singh II (1699–1744 AD). Jaipur (City of Victory) was founded by Maharaja Sawai Jai Singh II in 1727. It is the only city in the world symbolising the nine divisions of the Universe through nine rectangular sectors sub-dividing it. The architect who formalised the city’s plans on the Shilpa Shastra, the epic Hindu treatise on architecture, mixed it with the sublimity of the Mughal and Jain influences of those times. The city was painted pink in 1853 in honour of the visit by Prince Albert. Except for the busy traffic of bicycles, cars, and buses, little seems to have changed.

After breakfast proceed for full day city tour of Jaipur – visiting Amer Fort located at a distance of 11 kilometres from Jaipur and was the old fort of the Kachhwaha clan of Amber. It used to be the capital, till it was moved to Jaipur. The fort is built with white marble and red sandstone and looks even more attractive because of the Maota Lake in the foreground. The fort in itself is a beautiful sight to behold but as one looks on the fort with its clear reflection on the lake in the front; one cannot help but wonder if it is a dream or a beautiful illusion. An elephant [Subject to availability/alternatively by jeep] will spare you the trouble of climbing up to the fortress. Once on top, stroll through the sprawling complex of courtyards and halls with a well informed and well spoken guide who would regale you with tales of yore. 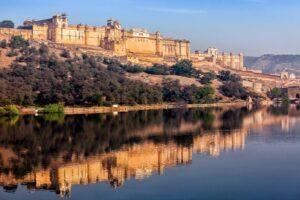 Later visit the City of Jaipur. Among the highlights to be seen while touring Jaipur include the City Palace, which is an overwhelming complex of exquisite palaces, gardens and courtyards, decorative art and carved doorways. The palace museum houses collections of rare manuscripts, armours, costumes, carpets and miniature paintings. Walk to the adjacent Jantar Mantar or Astronomical Observatory made by the Maharaja of Jaipur, built in 1726 and is one of the five such astronomical wonders built by Sawai Jai Singh and makes accurate predictions even to this day. Jaipur is a shopper’s paradise. Most of the bazaars are in an old city with a wide range of things to buy, from jewellery (precious and semi-precious stones and handcrafted silver) to textiles to handicrafts and antiques. No doubt, for an avid shopper “Jaipur” is the choicest of the city to shop and collect memorabilia.

Today in time transfer to Jaipur Airport / Railway Station to board your flight / train for onward journey to your next destination.