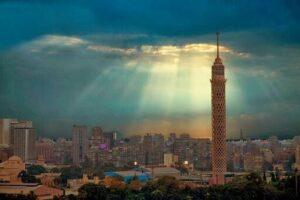 Upon arrival at Cairo international airport you will be met by our Airport representative (holding your Name).

Our Cairo head Representative will welcome you, overnight at your hotel in Cairo, 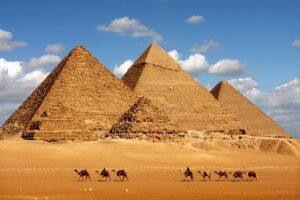 Morning- Breakfast at the hotel then our friendly expert Egyptologist guide will accompany you to the area – inspiring Pyramids and Sphinx at Giza was built 4600 years ago. Khufu, the successor of Sneferu, was known as a tyrant and in his arrogance he decided to have a tomb built that was bigger and better than all others,The three Pyramids: Cheops (Khufu), Chephren (Khafra) & Mycrenios (Menkaura). The Great pyramid was built by King Cheops (IV Dynasty). King Chefren, the son of Cheops, built the second Pyramid and the third pyramid was built in the reign of “Menkaura”, the son of Chefren. The mysterious Sphinx, with its mask of Chephren and body of a Lion, stands Close by guard of the land of Pharaohs, The Sphinx and the three pyramids were considered one to be one of the Seven Wonders of the World.

Then our friendly expert Egyptologist guide will accompany you to visit the famous Egyptian museum where you will see many precious antiquities, then at evening drive to Sound and light show at Pyramids, overnight at your hotel in Cairo Morning- Breakfast at the hotel then our friendly expert Egyptologist guide will accompany you to visit the Coptic area of Cairo where the Romans constructed the fortress of Babylon. Built on the ruins of two towers of the fortress towers is the church of St. Mary, more commonly known as the Hanging Church. Next you will visit St. Sergius where it is said to be the resting place for the holy family, then fly to Aswan and overnight, 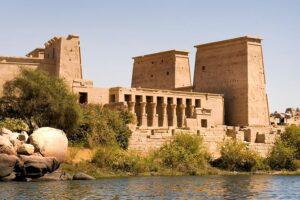 Early morning visit Abu Simple temple, then you will transferred to your selected Cruise. After freshening up you can take an afternoon tour to the Philae temple. As the centre of the cult of Isis, the island of Philae was an important place of pilgrimage for worshippers until long into the Christian era. From Philae, Isis was said to watch over the sacred island of Biga, one of the mythical burial sites of her husband Osiris. After the building of the Aswan Dam, the island’s temples were partly submerged in water and visitors took to rowing boats to peer at the remains. Then Aswan High Dam, one of the biggest dams in the World (measuring 360 feet high and over a mile and a half wide), was erected to store the flood waters of the Nile in Lake Nasser, Overnight on the boat. 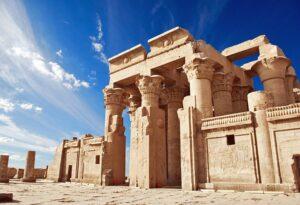 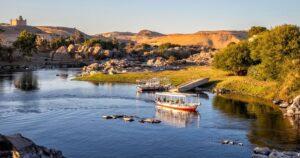 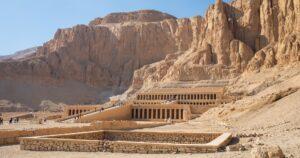 An early morning, continuation our touring in Luxor, by visit the West Bank – Valley of the Kings: the remote, barren .It was the necropolis of the New Kingdom pharaohs. By digging their tombs deep into the Theban Hills, pharaohs from Tuthmosis I on hoped to stop robbers stealing the priceless possessions buried with them. Valley of the Queens: Named by Champollion, It lies to the south-west of the Valley of the Kings and holds the tombs of many royal wives and children, Hatshepsut Temple: Against its stark mountainous backdrop, the partly rock-hewn Mortuary Temple of Hatshepsut at Deir al-Bahri is a breath-taking sight. Colossi of Memnon: the two enthroned statues of Amenhotep III are the first monuments most visitors see on arriving in the West Bank, then fly to Cairo and farewell to the pharaoh’s land