Bangkok, Thailand’s capital, is a large city known for ornate shrines and vibrant street life. The boat-filled Chao Phraya River feeds its network of canals, flowing past the Rattanakosin royal district, home to opulent Grand Palace and its sacred Wat Phra Kaew Temple. Nearby is Wat Pho Temple with an enormous reclining Buddha and, on the opposite shore, Wat Arun Temple with its steep steps and Khmer-style spire. 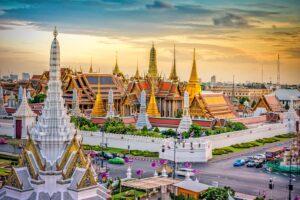 Arrive Bangkok airport, welcome local representative will assist you for private transfer by air-conditioned vehicle to the hotel. Check in your room and rest of the day is free at your own
(Standard check-in time after 1500 hrs.) Overnight at a selected hotel in Bangkok. Breakfast will be served at the hotel.
After breakfast we will pick up you at hotel lobby. We start to visit Wat Thong (Wat Traimit Wittayaram) is an ancient temple. The temple has signature is Luang Phor Thong Kam, the largest gold Buddha image in the attitude of subduing Mara and is recorded in the Guinness World Record. Then, we continue to visit Wat Benchamabophit, (the Marble Temple) was designed by Prince Narisara Nuwattiwong. It typifies the impressive and orderly traditional Thai architecture. It is thus accepted as having the best architectural plan. The temple was built from marbles imported from Italy, Significant Architectures within the Temple Phra Phuttha Chinnarat is a bronze replica of the original statue of the Sukhothai Period (1238-1438) which is still enshrined in Wat Phrasi Rattana Mahathat in Phitsanulok Province. The chapel is entirely decorated with marbles. The chapel is in the shape of five-layered square. The roof is in yellow and is curved. 52 Buddha statues in different postures placed on the balcony at the back of the chapel. It is Prince Damrong Rajanubhab who collected these statues taken from cities he visited as well as overseas. The Som Dej Pavilion has four faces, with breathtaking decorations and elaborate patterns. The Ordination Throne Hall is an abode for King Rama V when he was ordained in 2416 B.E. The Song Tham Thorne Hall was built by Queen Saovabha Phongsri in dedication to Royal Crown Prince Vajirunhis Sor Por Chapel was built by Queen Saovabha Phongsri as a library collecting Buddhist scriptures. Nowadays, it is where Norasingha Buddhists statue and other significant statues are housed. The well tower is a tall tower decorated with marbles. Overnight at selected hotel in Bangkok. Breakfast will be served at the hotel.
Time will be at leisure.
Overnight at selected hotel in Bangkok.

Breakfast will be served at the hotel. Free at own leisure until departure time (Standard check-out time before 1200 hrs). Check out your room and you will be taken to Bangkok airport for your flight to the next destination.

An evening, pick you up from your hotel to River City Pier for the Dinner Cruise along Bangkok’s Chao Phraya River, otherwise known as the River of Kings, enjoying the nightlife and precious architectural heritage of Bangkok’s picturesque waterfront, which includes Wat Arun (The Temple of Dawn), Wat Phra Kaew, the Royal Grand Palace, the Golden Bridge and more. The cruise’s entertainment comes shows Thai culture and also a pop jazz band to dance to. Diners at each table will also be serenaded by live musicians 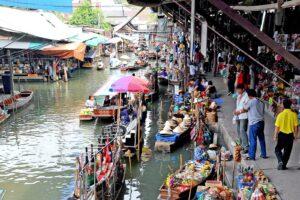 Start the morning at 0700-1300 Half day visit to Damnoen Saduak floating market. Brings you to a unique market where locals sell their products on their paddle boats!  Get on a long-tail boat through the village to see their real lives. Being an important transportation route since King Rama IV, Damnoen Saduak canal is famous for its Floating Market where the locals and neighboring people come to trade their products on paddle boats. After more than 150 years, the market is still alive and becomes one of the most popular attraction near Bangkok. 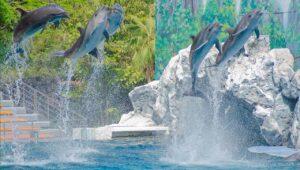 Thailand’s greatest open zoo and leisure park that offers a great variety of entertainment for everyone. Whether it is an exciting safari drive through the picturesque African wilderness settings, an intimate encounter with our friendly dolphins or an exhilarating fast-paced action stunt spectacular, Safari World has it all.

Explore Safari World, a drive-in zoological park divided into two parts. The first part is Safari Park, an open zoo with wild animals. The second part is the Marine Park where there are a variety of marine animals and shows of trained dolphins, birds, seals and apes.

At Safari Park, stretching 5 KM and lasting 45 minutes, a drive through the scenic Safari Park presents a unique opportunity for the closest encounter possible with rare and endangered species of the animal kingdom. Explore Nature’s numerous wonders in their original splendour and respond the call of the wild, while remaining in the comfort of our private car or coach. Witness the truly breath-taking Tiger & Lion Feeding show the only one of its kind anywhere in the world.

Explore Marine Park where there are a variety of marine animals and shows of trained dolphins, birds, seals and apes.

10:10 hrs: Orang Utan Boxing Show – Marine Park closest cousins take centre stage as they tickle you with their keen sense of humour and dazzle you with their mathematical gifts. And who could miss world-famous Thai Boxing Show, starring the funniest and hairiest champions.

11:00 hrs: Sea Lion Show – Lighthouse Cove will never be the same again with its new occupants. This quiet town along the pacific coast will be turned upside down when our Sea Lion friends wreak havoc as they pull one trick after another. Chiefs of Mischief take control.

12:00 hrs: Lunch, we’ll issue the coupon and you can buy the food for lunch by yourself (The restaurant are temporarily suspended)

13:40 hrs: Dolphin Show – the most intelligent of marine creatures will captivate you with their effortless mastery of the most difficult tricks! Get them to kiss you or shake hands with you! Marvel at dolphins somersaulting in mid-air, tossing balls with their fins and singing in a chorus, or performing dives unrivalled in their gracefulness and swiftness.

15:30 hrs: Bird Show – Stand by for a stunning show as our colorful performers take a plunge from the arena to the stage. Watch with amazement and bewilderment the acrobatic and athletic skills of these intelligent creatures and share in the intimate secrets of a pair of lovebirds. See how our feathered friends fly their way to your heart.

Remark: Program is subject to change according to the weather and sea conditions.

Rates are net per person per package in $ USD

Extension Night per room per night in USD

Supplement Charge per room per night in USD.

7 days or more prior to arrival: No penalty

@USD29 per vehicle per way.

@USD29 per vehicle per way.