Greece is a country in southeastern Europe with thousands of islands throughout the Aegean and Ionian seas. Influential in ancient times, it’s often called the cradle of Western civilization. Athens, its capital, retains landmarks including the 5th-century B.C. Acropolis citadel with the Parthenon temple. Greece is also known for its beaches, from the black sands of Santorini to the party resorts of Mykonos.

Welcome to Athens.
Meet and greet you at Athens International Airport and transfer directly and privately to your Hotel in Athens. Free time at your leisure, according to your arrival time.
Overnight in Athens. 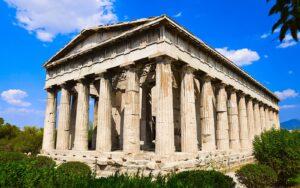 Breakfast is served at the hotel. (Subject to tour pick up time, please arrange with reception if needed). At designated time – Pick up from your hotel or nearby meeting point and drive to Tour terminal to start a half day city tour of Athens.

From the Acropolis to Omonia Square, with the half-day sightseeing and Acropolis museum tour you`ll see all the famous sites of ancient and modern Athens on this comprehensive morning tour. Hear insightful commentary from your guide, and pass top Athens attractions including the Tomb of the Unknown Soldier, Greek Parliament building and Presidential Palace Offering a perfect overview of the modern city, this guided half-day tour will help you get your bearings if this is your first visit to Athens.The Athens half-day tour, depart for a photo stop at Panathinaiko Stadium where the first Olympic Games took place in 1896. It is the only stadium built out of white marble. Proceed, passing by Zappeion and Temple of Olympian Zeus. You will then pass the Athens Trilogy which includes the University of Athens, the Academy of Athens, and the National Library. Continue passing by National Garden, Hadrian’s Arc, St. Paul’s Church, Parliament, Tomb of the Unknown soldier, Schliemann’s House (Numismatic Museum), Catholic Cathedral, Old Parliament, Constitution Square ,Russian Orthodox Church, and finally ACROPOLIS ( guided visit Propylae the gateway, Temple of Athena Nike, Parthenon, Erechtheion with its Porch of Maidens). Stroll up to the UNESCO-listed site that served as the ancient citadel, and tour the buildings as you hear how they reflected Athens’ prosperity in the 5th century BC. Continue the expert guided Athens sightseeing and museum tour with a pleasant short walk passing by Herodion and Dionysos Theater, in order to visit the ACROPOLIS museum. Avoid and skip the lines of the new museum. Main attractions such as votives, artifacts of every-day life, statues from archaic period, Caryatids, and of course the Parthenon hall with the metopes, the pediments and the frieze will impress you.

Included: Entrance fees of the Acropolis and Acropolis museum -Transport by luxury A/C bus -Hotel Pick up and drop off service – Services of a Professional and licensed guide -All taxes. Not Included: Gratuities (optional) – Personal expenses.

Transfer back to hotel after the tour. Afternoon at leisure or go for an afternoon/evening tour. 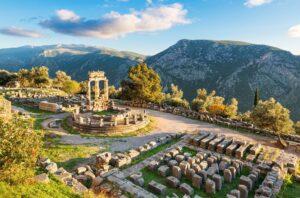 Breakfast is served at the hotel. (Subject to pick up time, please arrange with reception if needed).

At designated time – Pick up from your hotel or nearby meeting point and drive to Tour terminal to start the Full day to Delphi.

Delphi , The Oracle Full Day Tour (f/d Daily morning tour)(sic = Seat in Coach sharing tour). (Approx. 10 hours). Depart from our terminal for one day trip from Athens to explore the UNESCO-listed archaeological site of Delphi with an expert guide and learn how the city was considered the ‘Center of the World’ in ancient Greece and today one of the most famous archaeological sites of Greece. Along the way, you will see the plain of Beotia, an agricultural center and you will also pass by the city of Theva, the birthplace of King Oedipus. Immerse yourself in the myths and monuments of classical Greece on this full-day tour of Delphi from Athens.

After meeting your guide in Athens, hear tales about the ancient Greeks and their lives in Delphi while traveling to the town by air-conditioned coach. You will reach Delphi towards Mt. Parnassos, making a short rest stop outside the town of Levadia.First stop is a tour of the Delphi archeological site – a UNESCO World Heritage Site and easily one of the most important digs in Europe. As you walk around the evocative ruins with your guide, see famous monuments likethe monument of the Argive Kings, the treasury of the Athenians, the Athenian Stoa, the Polygonal Wall, the monument of Platea and the Temple of Apollo famous for its oracle .Second stop is Delphi museum, with it`s spectacular exhibits include the frieze of the Treasury of the Sifnians, the Naxian Sphinx, the Statue of Antinoos the metopes of the Athenian treasury, the famous bronze Charioteer, originally created to commemorate a victory during the 476 B.C. Pythian Games, and many other artifacts. Be sure to check out the bronze Charioteer of Delphi and the Sphinx of Naxos.After lunch, visit Athena Pronaia Sanctuary, the most photographed spot in Delphi. Return to Athens passing by the picturesque mountain village of Arachova, built on the south slopes of Parnassus, well known for its attractive hand-woven carpets, rugs and quilts, as well as for its wine and cheese (short photo stop).

Guided tour of the Temple of Apollo and the world famous Oracle, a UNESCO World Heritage Site – See the Athenian Treasure – Explore Delphi Museum and see the Charioteer of Delphi – The only day tour in Athens visiting Athena Pronaia

Transfer back to hotel after the tour.

Kalimera – Good Morning
Breakfast is served at the hotel. (Subject to pick up time, please arrange with reception if needed).
Meet you at hotel’s reception area at the designated departure time and transfer you directly and privately to Athens International Airport for your flight to the next destination of yours.